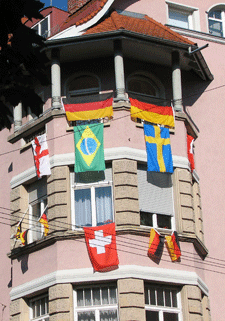 In a prior post, I offered a new corporate citizenship model that replaces heroic management and reflects our world’s growing capabilities and challenges. Today I’d like to turn this lens outward and introduce a parallel new concept: the “citizen-customer”.

The citizen-customer reflects the wider set of criteria customers use to make decisions as well as the increased impact individual customers or citizens-at-large can have on a corporation’s interests.  What propels the citizen-customer’s increased influence is their greater knowledge, real-time access to information and global communication capabilities.

Citizen-customers recognize the ability of democratic governments to manage and control corporations is flagging.  (Note: autocratic economies are different – see post).  This became evident through the bailouts in the global financial crisis where we learned that selective firms were “too big to fail”.  Multi-national corporations now stretch around the globe with influence, assets and revenue streams that dwarf many of the worlds 193 soverign nations.

The confluence of greater customer power with shrinking government influence has increased the interaction between corporations, customers and citizens-at-large.  Multi-nationals now monitor and use social networks, executive blogs and mobile apps to interact directly with customers as well as the public at large. The citizen-customers’ buying criteria now extends beyond product and service benefits, value received and trust.  It includes but is not limited to ecology, sustainability and political considerations such as child labor practices.  For example, Apple recently had to defend the working conditions at Foxconn, its Chinese manufacturing partner, due to abnormally high suicide rates.

Ten years ago, these broader buying considerations were the realm of one-off investigative reporting, public policy debates and special interest groups.  Citizen-customers think wider and vote with their wallets.  The shift to healthier organic and natural foods provides a compelling example.  Up to the recent recession, natural food purveyor Whole Foods grew revenue at 20% per annum vs. Safeway’s 5%.  This tracks with the growth of organic food versus total U.S. food sales from 1997.

Furthermore, people who are not customers or employees find themselves entwined with the consequences of corporate actions more than they used to be.  Qualified home buyers and reputable small business owners who sought credit during the recent financial crisis found that they were innocent victims of Wall Street’s malfeasance.  People whose WIFI communications were intercepted by Google’s roving Street View camera crews understandably feel their privacy was invaded. (note: Google has acknowledged and is addressing the error).

The emergence of the citizen-customer is driven by technology.  The growing role, scale, scope and risks of advanced technology make our global society possible and problematic.  For example, individuals can buy and sell stock online across multiple exchanges through discount brokers such as Charles Schwab for less than 5% of what it used to cost.  However, the same underlying technology also powers automated trading behemoths such as Goldman Sachs.  Automated trading now accounts for over 70% of daily market volume.  The paradox is the average citizen has greater access to financial markets but is increasingly nervous about the fairness within those markets.

We’re raised to think of citizenship as the interface between government and society.  Citizenship classes teach us about the importance of voting and the rules of representative democracy.  What’s happened is that technology alters the power equation.  And that ultimately changes expectations, roles and responsibilities for citizens and corporations in broader societal governance.  The fourth amendment of the U.S. constitution may provide you with protection against search and seizure but if you want to keep your Facebook profile private, that’s between you and Facebook.

With the exception of NASA and defense spending, government doesn’t create, distribute or manage technology.  At best, it reactively responds and regulates it.  Even where regulatory laws are in place, be it due to neglect, incompetence or overload, enforcement is increasingly spotty.  The Minerals Management Service (MMS) was unable to prevent or address the BP disaster just as the SEC was feckless during the financial crisis.  The fact of the matter is corporations are the purveyors of technology and when things go sour, they are the primary ones we can turn to for addressing mishaps.

The key to these companies success is not just that they respond better than others when technology fails but that they lead proactively.  Through corporate values such as J&J’s famous credo, leaders inject broader criteria into discussions, clinical data reviews and strategy formulation.  Long before it was a popular issue, HP has provided strong leadership in electronic plastics recycling in collaboration with MBA Polymers.

In contrast, BP’s inadequate investment in blowout protection infuriates people.  It appears they are more concerned with short term cost containment than preserving the marshy shores of the Gulf Coast.  Reasonable folks know that all that Obama or any government official can do is knock heads, levy fines and commandeer vessels to help mop up after the fact.  What galls citizen-customers is when they see large multinationals operate as though they’re too big to influence, never mind to big to fail.

The citizen-customer concept and terminology helps business leaders reframe rather than react defensively to customers’ and citizens’ broader concerns.  Just as some firms use the term “internal customer” to accentuate the internal teamwork required to delivery products and services, employing the “citizen-customer” framework automatically signals a broader set of decision considerations.

I’ll return to this flesh out this concept in subsequent posts.  For now, use the following questions to incorporate the citizen-customers concept into your current deliberations and decisions:

Leave a Reply to scholarships for womenCancel reply