The Public Facebook & Big Data Dilemma:
What’s Yours is Mine and What’s Mine is …Who’s? 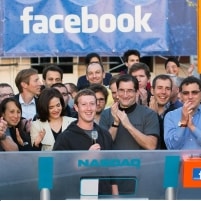 Facebook Gets a Taste of the Social Consequences of an IPO

As they say, what goes around comes around.  Facebook’s been in the public hot seat ever since their IPO.  And I’ve got to admit, the stories have that delectable balance of possible fact and enough of the sleaze we see on tabloids next to supermarket checkout lines.  (Don’t even think of telling me you’ve never looked at them!)

Reporters, SEC, NASDAQ officials and bloggers are digging furiously under the edge of the Facebook tent.  Did they share softer earnings estimates with institutional investors during the road show that they didn’t disclose publicly?  Did their CFO’s decision to increase the shares offered by 25% hurt the IPO’s initial performance?  Did Mark Zuckerberg’s marriage immediately after the IPO secure his Facebook bounty as separate property?

There are some legitimate questions here along with a lot of noise.  Who says an IPO has to bounce at launch?  Good for investors but that also means that Facebook would have left money on the table.

This morning, IBM banned Apple’s Siri.  IBM CIO Jeanette Horan told MIT’s Technology Review that she worrieds that “the spoken queries might be stored somewhere”.  She’s right.  Apple’s software agreement spells out that what you say is recorded and sent to Apple along with names of people from your address book and other data to help Siri do a better job.  How long Apple stores and who looks at this data is not stated.

Flash forward to Google.  A New York Times story details how privacy inquiries get little cooperation from Google.  German officials inquiries into Google cameras sniffing Wi-Fi connection data as well as taking pictures have yet to reveal a complete explanation.

There’s no question in the potential data mining offers by capturing and connecting disparate data sets to learn more about our world.  But who gets to decide who owns the mine, the ore and who reaps the benefits from what’s taken out?  What do we do with information “slag” – stuff that doesn’t seem important based on the analysis undertaken but in the hands of bad guys could be very harmful.

Rebecca Skloot tells a fascinating and parallel tale in The Immortal Life of Henrietta Lacks. Ms. Lacks was the daughter of a poor tobacco farmer who’s cells were taken without her knowledge and became the first thriving cell line.  HeLa cells were vital for developing the polio vaccine and if you could pile all the HeLa cells ever grown on a scale, they’d weigh more than 50 million metric tons.  Yet until Skloot’s book was published, Lacks was virtually unknown, or compensated.

No answers today are offered today other than to suggest that economics alone should define the answer.  As always happens, technology progress and economic opportunism outpace society’s understanding and responding to the unintended consequences.  Government doesn’t have the answers.  They struggle just to keep up.

But that doesn’t mean there isn’t a problem brewing.  We live in an information society governed by laws, practices and habits from a manufacturing age.  That’s an unsettling disconnect.