“It all started with a tweet on the afternoon of September 3rd, 2018.

‘Believe in something.  Even if it means sacrificing everything.’ 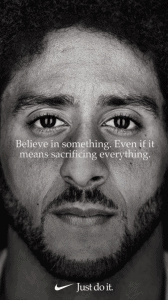 m. Not long after, the full commercial—timed to mark the start of the 2018/2019 NFL season and celebrating the 30th anniversary of the tagline “Just Do It”—lit up the cultural discourse like no ad had done in recent memory.

It was divisive because it jumped on America’s biggest fault lines—race, patriotism, sports, and business.

“It doesn’t matter how many people hate your brand as long as enough people love it,” Knight told Fast Company last year. “And as long as you have that attitude, you can’t be afraid of offending people. You can’t try and go down the middle of the road. You have to take a stand on something, which is ultimately I think why the Kaepernick ad worked.”

Bold, yet Nike was completely in step with the racial tensions in our society.  And for business readers, they claim $163 million in earned media, a $6 billion brand value increase, and a 31% boost in sales.

President Trump’s administration is doing all it can to impede voting by mail in the middle of a pandemic.  One could list the facts to support this claim but it’s not necessary and more importantly, gives credence to yet another distraction.

There’s no question that voting is the central tent pole of a government by the people.  Pull out the free and fair election timber and democracy heaves a sigh and collapses.

Blow the whistle.  Stop the game.

Let’s bring UPS and FedEx onto the field.  You want to know “What Can Brown Do For You?” or what FedEx means by “We Live to Deliver”.

Easy…deliver voter’s ballots.  Step up and stand alongside the U.S. Post Office.

In the words of the musical Hamilton, this is the time for both firms to rise up, and help Americans’ not throw away our democracy’s November shot.  With their combined competence, these two icons of capitalism and democracy can make voting in a pandemic easy:

Snuff out this made-up, yet dangerously real controversy with action that gets ballots in and counted …absolutely, positively.  The financial returns could even be great as well.

You know what I’m saying…Just Do It!

As we get our arms around COVID-19, we’ll mix what we’ve learned with what we’ve missed!

Safety: The New Norm for Opening in Covid-19

As restaurants, shops, and bars light up their “Open” signs, there’s one question that everyone from employee to customer will be asking: Is it safe to come in? Outside heavy industry, safety training typically stops at fire drills and job-specific items such as arresting grease fires in the kitchen.  Customers don’t choose between Wal-Mart, Costco, Read more

How to Accelerate Covid-19 Vaccine Development

My friend Bob forwarded an opinion piece from today’s New York Times entitled: How long Will a Vaccine Really Take?  As the author of Fast Cycle Time, I’m rarely against faster development (as long as it delivers value). Bob’s note triggered me to take a deeper look at the underlying barriers and opportunities for speed Read more

Private offices have been under attack for decades.  First came cubicles followed by hoteling. Most recently, long tables where knowledge workers sit side-by-side in headphone-enabled bubbles are de rigueur.  In theory, each goes further to create a cross-functional community that also saves money by increasing the number of people per square foot.  Add in free Read more

Crisis comes in waves.  Like a hurricane approaching shore, it starts by catching our attention, then we cope through the storm, and ultimately, rebuild.  What folks often call the “new” normal comes after rebuilding.  Before then, there will be interim “next” normals. Once discovered, the novel Coronavirus caught our immediate attention because of its virality Read more

The Irksome Confusions of Pitching Investors

Entrepreneurs live on a super-sized serving of passion, commitment and courage.  They commit their lives while investors offer dollars and perhaps some time.  Those same qualities can silently lead an entrepreneur astray when pitching investors. For example, what seem like a series of strategic pivots to an entrepreneur, an investor could view as an endless Read more

New leaders have an opportunity to drive change.  What we’re seeing on the national stage is a lesson in change leadership that not only challenges the status quo; it is an abject lesson in how not to lead change. Trump’s emotional appeal worked well for securing the mandate to change but it’s killing him in Read more

If you’ve been anywhere near a startup in the last three years, you’ve heard about pivoting. A pivot is just as it sounds: a deliberate change in business model and/or product direction hoping to hit the market sweet spot.  Popularized by Eric Ries’ book The Lean Startup, the underlying assumption is that finding that sweet Read more

Surviving in The Gig Economy:
Don’t Be An Ant

“There’s something happening here, What it is ain’t exactly clear” For What It’s Worth, Buffalo Springfield, 1967 Ravinder drives for Uber two nights a week in Los Angeles.  On a farm in rural Poland, Peter tests computer code to complete a programming job he bid for on Odesk.  Across the valley, Peter’s girlfriend wraps penguin Read more

Angel investing starts with an initial contact, followed by screening that leads to a pitch and perhaps a deal.  There’s an underlying tension in the process.  Entrepreneurs want the angels’ money and to get back to growing their business as quickly as possible. Angels want the entrepreneur’s time to understand the business and investment potential. Most Read more

Before You Pitch Me, Ask Yourself:
Is Your Company a Me-Too or a Fast Follower?

Last week, I listened to seven startups pitches at the Band of Angels Deal Selection committee wondering at least three times, hadn’t I heard this deal before? Do customers crave another user friendly wearable that counts steps, heartbeats and measures sleep quality better than Apple Watch, FitBit, and Garmin? Is now the right time, to Read more