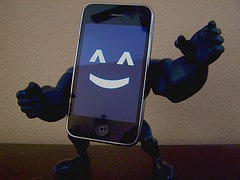 It’s hard to get headlines with 5% market share.  When your market capitalization passes Microsoft, everyone watches.  For a firm that highly values control and secrecy, Apple now stands center-stage with the flood lights shining bright.

Apple anticipated this three years ago when it dropped “Computer” from its name.  Then cumulative iPod and iTunes revenue surpassed MacIntosh computers by nearly 2:1.  Today, the MacIntosh accounts for only 28% of revenue versus the iPhone’s 40%.  Apple now competes directly or indirectly with computers, consumer electronics, cellular phones, digital content and shortly search.

The question facing Apple is can it continue to be successful on this much wider and exposed global stage?

Although many are quick to focus on a company’s weaknesses, most winners lose their step by over relying on their strengths.  Apple’s success has been fueled by a very distinctive point-of-view embodied in elegantly designed “insanely great products” that deliver a superior experience to users.  Apple has wrung more out of secrecy and anticipation of its next products than most companies achieve through advertising.  As the recent Gizmodo pre-release scoop of the iPhone 4 demonstrates, this gets harder to do the bigger you are.

In a recent post, I described the broader expectations and influence “citizen-customers” have for companies on the global stage.  The term reflects the wider interests and influence citizens-at-large and their representatives have regarding a company’s actions.  For example, Apple’s Chinese manufacturing partners alleged high suicide rate has required more executive time and attention than years past. As Apple’s influence expands in scope and reach, actions that used to be ignored or overlooked, are now subject to scrutiny from multiple sources.  To wit:

Will Apple’s historic strengths continue to serve them or do they need to develop new competencies?  With this question in mind, let’s examine seven challenges facing Apple leaders.

1)      Security – With just 5% market share in the PC market, malware and virus writers have mostly ignored the Mac.  However, Apple’s iPhone success now makes them a target that coincides with the explosion of mobile security concerns overall.  Lacking strong experience in enterprise computing where security issues are paramount, it’s reasonable to expect more problems such as the recent AT&T email address breach on the iPad.  Mobile devices and cloud applications don’t enjoy the end-to-end control that Apple has on the MacIntosh platform.

Apple has to augment its existing high concern for privacy with more security capabilities that reflect the broader exposure their devices and services will have.

2)      High control – Several years ago, Steve Jobs said Apple wasn’t going to do a phone because it had to be sold and controlled through the “four orifices” referring to the major cellular service providers.  Jobs told Walt Mossberg that their entry into cell phones was driven by AT&T’s unprecedented willingness to give Apple control over what was on the handset.

Apple’s ability to innovate new business models in music and now cellular underscores what is perhaps their most frequently ignored strength.  This gives them substantial influence but it also makes them very threatening when they introduce more devices and services.

Control of the user experience is what differentiates Apple from others thus it remains critical.  Based on past success, however, Apple will have to be exceedingly deft about what they exchange or share for that control.

3)      Services — Services contribute minimally to Apple’s revenue but provide enormous influence.  In 2009, iTunes accounted for 25% of the overall music market in the U.S. and 69% of digital downloads.  Add in the nearly quarter of a million applications in the App Store, Apple’s forthcoming mobile advertising platform and the emergance of iTouch, iPhone and iPad as gaming platforms and they are obviously a multi-faceted threat.

Unlike traditional Apple products where patents, copy protection and design provide protection, services are easily copied.  To date, Apple services such as iTunes and Apps are tightly integrated with their products.  Few companies do a great job balancing product and service businesses because the different business models invite internal competition for investment, resources and technology.

While nearly every company talks about making solutions rather than products, Apple is one of the few that does it without talking about.  It’s critical that they strengthen this perspective to keep potential internal rivalries at bay.

4)      Individual customer primacy – During the Mossberg interview, Jobs was ebullient about making products for consumers over the enterprise.  He relishes the fact that his users vote directly with their wallet vs. the multiple stakeholders that must be satisfied before corporations can buy.  Can Apple maintain this end user focus as they enter new businesses such as mobile advertising where the customer who pays for the ads or the developer who receives some revenue is not the end user?

Apple can learn from Amazon’s tenacity in keeping the end customers’ needs paramount as they have expanded their web retail business.  Without this intimate connect, Apple can’t create the superior customer experience for which it’s known.

5)      Content pricing power – Jobs told Mossberg that digital content can be sold when it’s priced for volume.  The success of iTune’s .99 per song pricing demonstrates this but doing so also destroyed the music industry’s business model.  Without album pricing, musician royalties and major labels CD revenue have dried up.

On the other hand, Apple has artfully created a win-win for book publishers by enabling them to raise prices.  This may appear contradictory but I’d bet there are far more content producers and distributors anxious about Apple’s views on volume pricing than not.

Technology is driving these changes rather than Apple or any other company.  What Apple understands better than most is how to help traditional content providers use technology to build new business models. In doing so, it has to evolve its penchant for control as it demonstrated last year when it removed digital rights management from iTunes.

6)       Increased competition and stakeholders – One of the inspiring attributes of Apple has been its consistent focus on the customer rather than the competition, Wall Street and other stakeholders.  This has served them well when it was just Apple vs. PC as the brilliant ad campaign reminded us.

Today it’s Apple vs. Google, HTC, Samsung, RIMM, Sony, Amazon, Electronic Arts, PC, government agencies, etc.  In contrast to the last gasps of the music industry after ineffectively combating piracy, these are healthy, vibrant companies with plenty of smart people, money, lawyers and lobbyists.  They will go to great lengths to protect their business as well as challenge Apple in new ones.

7)      Regression to the mean – As companies grow, their courage and capacity to “Think Different” abates.  While this may sound like heresy relative to Apple history and strong culture, the uniquely demanding strength and influence of Steve Jobs is integral to Apple’s heart and soul.  Others will step up when he leaves but they will not replicate him.  Furthermore, when Jobs’ strengths are overdone, errors occur.  Past issues such as option backdating and disclosure failures regarding his personal health will have larger consequences in Apple’s wider world.

Don’t assume for a moment that because these forces are not visible, they aren’t constantly threatening.  Pay more attention to insuring Apple values are understood and enacted in ways that appreciate the broader stage on which they stand.

If Jobs were reading this list, my guess is he would acknowledge these issues but quickly rise above the details.  He would tell me that what will enable Apple to continue to be successful is the passion its people have to change the world for the better.  And I would agree with him.

What I would add is that Apple now plays a much bigger stage, with better lighting and has less control over the audience, the complexities of production, the city in which the stage sits and those milling outside.  This new context will require Apple people to widen their horizons about what defines changing the world and what better means to a broader audience of citizen-customers.  I’d suggest that continuing to deliver and maintain the same outstanding customer experience will also be challenged as they offer more value through services.

Next post: Designing Change: What Would IDEO, Frog or D2M Do?