Competing Against the New Autocratic Economies

Rising from the ashes of communism has emerged a new form of competition that is as fast as it is formidable.  I’m speaking of the “autocratic economies,” the most important being China with Viet Nam, South Korea, and Singapore as other examples.  To a large degree, these countries embrace economic democracy while keeping significant political control in the State.

Make no mistake, the new autocrats have abandoned the ideological State planning of past communist regimes.  They actively inject free enterprise into the remaining state industries and failing progress, demonstrate a willingness to take them private.  The new autocrats are competitively focused and use time horizons extending beyond Wall Street’s infectious quarter-by-quarter earnings mentality.  The autocrats readily make big investment decisions that integrate across society.  Plus they make them fast.   For example, while one-third the size of the U.S. economy, China rapidly implemented a stimulus package of nearly the same size. Their stimulus was sharply focused on infrastructure and contained far less pork than ours.

Included in China’s stimulus was health care reform.  By next year, Business Week states that90% of China’s citizens will be covered by a universal health-care system including the construction of 30,000 hospitals, clinics and care centers.  Contrast that with the polarized debate and heavily compromised and limited insurance reform we may get from Washington.

Lest we forget, it wasn’t that long ago that GM executives told us that they spent more money on healthcare per vehicle ($1525) than steel.  Their problem is not unique.  Spiraling healthcare costs don’t just eat up profits, they prevent companies from increasing worker pay.  Without increases, the pay gap between the top and average worker has grown from a ratio of 71:1 in 1989 to 262:1 in 2005.  In a consumer based society, hobbling workers with less buying power makes no sense.

Representative government has become a spectacle of extremes.  The left reflexively seeks to solve all imbalances by penalizing economic success as the right calls for simplistic free-market thinking even as the financial meltdown makes clear that the absence of all regulation makes no sense.  Our President is characterized either as a great reformer or the most dangerous communist since Joseph Stalin.  In the meantime, the autocrat economies accelerate their progress. 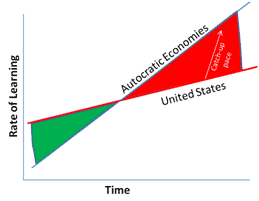 As illustrated, once a competitor is passed, the gap between them and the new leader grows rapidly.  For the former leader to catch up, they have to accelerate to a rate that’s not only faster than their current pace but faster than the new leader’s.  If you’ve ever watched the Tour de France, sportscasters often describe the rider being passed as having “cracked” since they are rarely able to surpass the acceleration of the new leader.  We are cracking.

Two years ago, Harvard’s preeminent strategy guru, Michael Porter, argued for a national economic strategy.  In doing so he outlined the strengths and weaknesses of our economy.

Porter’s call for a national economic strategy stated, “Political leaders, business leaders, and civil society must begin a respectful, fact-based dialogue about our challenges. We need to focus on competitive reality, not defending past policies.”  The irony is that we have done this before.

The U.S. economy thrived in the post WWII environment.  With no fighting on our soil, the United States transitioned industrial capacity away from supplying war materials and back to goods and services.  Concurrently, Europe and Japan rebuilt their societies and industrial capacity.  We were stronger than the competition in part because there wasn’t much.  VW and Toyota, today’s strongest foreign auto companies, were virtually non-existent.

During this period, the familiar business voices calling for less regulation and lower taxes were not silent but there was a strong, competing voice.  Dubbed the “inner circle” by Wharton’s Michael Useem, the inner circle was a small but highly influential group of business leaders that sat on multiple boards, had a high level of involvement in civic activities as well as membership in national policy making organizations.  Including leaders from the largest Fortune 500 companies, they blended the interests of the corporate community with pragmatic attention to the overall well-being of society.

For example, they acknowledged that certain regulators such as the SEC had a legitimate role.  Leveling the playing field in the interests of fair play was reasonable.  Contrast that with our inability to address the abuses of instruments such as credit default swaps.

This wider thinking also crossed over into policy making groups including the Council on Foreign Relations where the inner circle worked with diplomats, academics and even labor leaders.  Effective engagement required them to put aside corporate-specific, short-term interests.  Rather than being another polarizing voice, business leaders in our largest corporations acted as a leadership catalyst for society at large.  In the language of this blog, they thought and worked wider than their formal roles required.

To get beyond the current paralysis of special interest groups, the call has to be framed bigger than business – we need a competitive society to win in the wider world.  As David Brooks described in today’s New York Times, the United States is becoming a broken society.  Patching a sector at a time will not work.

Imagine the potential energy and motion that could be stirred up if GE’s Jeff Immelt, Cisco’s John Chambers, Corning’s Wendell Weeks, Ford’s Alan Mulally, along with selected others from education, labor and government were chartered by President Obama with defining the critical societal improvements essential for competing in this new world within six months.  Why six months?  Because that’s the pace at which business work when it’s important; and this is.

Do I believe a “plan” is the answer?  No.  Like most strategic thinking, the value would be in the alignment and energy that is generated as the conversation grows.  By using the latest communication technologies it’s entirely possible this group could stimulate a pragmatic, national conversation that rises above the parochial politics that infect us today.