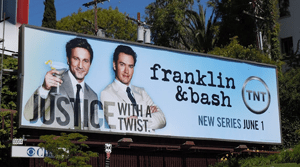 This piece  offers a proven approach that will dramatically cut the deficit without cutting spending or raising taxes.  Interested?

Run the government as a business but not any old business. Certainly we wouldn’t want to run it like the airlines.  Who’s going to advocate that Wall Street take over the remaining parts of government they don’t already control.  No I say follow in the footsteps of Google.

Why Google?  Because it’s a business that fits the American dream of use now, pay never!

How can they do that?  Advertising.  Google (and Facebook, Twitter, etc.) is free because advertisers are endlessly willing to pay to get their products and services before our eyes.  The more popular the search term, the more money Google charges.

So let the Feds do what Google and Facebook already do and open the advertising spigot!  Put on your Don Draper suit and let’s slather advertising on government forms, buildings and yes, personnel.  Why should city buses be the only beneficiaries?  Total advertising spending is $500B a year with growth of between 4-5%.  It’s time the Feds got their fair share.

Let’s start with customs forms.  What better way to welcome one of the 60 million visitors into our economy than by putting detachable coupons for hotel, food and entertainment discounts on immigration forms?  Wouldn’t Marriott, McDonalds and Broadway want to reach them before anyone else does?  Is there a more American “Howdy”!

For those of us traveling, how about spicing up those TSA cards that we’ve all discovered after our luggage was inspected.  Your space has already been invaded so why not leave something more pleasant behind.  Put a “scratch and sniff” section on the notice suggesting perhaps a bit of Tide laundry detergent or Secret deodorant would tame that dirty laundry smell?

Then there’s paper currency.  With about $850B of paper money in circulation, couldn’t we make better use of the greenback for potential advertising space?  Isn’t it redundant to print “One” on the back of every dollar bill?    99₵ stores would kill for this space.  Take the Lincoln Memorial off the $5 and sell it to BankAmerica.  Based on low advertising cost of $.50 per thousand (CPM), currency advertising alone would raise just shy of half a billion.

Just as Google does with popular search terms, raise the rates for coveted high denomination bills.  Can you imagine Tiffany’s letting France’s Louis Vuitton grab the $100 dollar bill?  Newt Gingrich won’t have to hide next time he walks in to buy Callista a new bauble.

Advertising on your mobile phone is heralded as the next frontier so let’s have the Feds think out of the box. And I mean the Post Box.  With the largest civilian fleet of vehicles in the world covering 1.2B miles a year, this is the largest mobile display advertising play on the planet.  Start by selling just one panel on each truck.  Double down with two.

Google-ize America! will not discriminate or get sucked into today’s political controversy of class warfare.  Instead, think of poverty as a rapidly growing market.  Even with the new electronic “credit card” system for food stamps, there’s no reason not to let Tropicana and Minute Maid turn the sour taste of hardship into deficit reducing lemonade.  When food stamp buyers swipe their new electronic cards, let’s offer “did you forget” ads on checkout displays.

Another growth opportunity is prisons.  Is there any reason that orange jump suits have to be so boring?  Let’s go NASCAR and sell every inch of space to rehab programs, legal aid clinics, trade schools and of course, Smith and Wesson.

And why should PING just get access to Masters winner Bubba Watson’s golf visor?  Sell Obama’s for real money!  Heck, do the podium and backdrop as well!  Why can’t Hillary’s appearance be augmented with tasteful product placement fees from Coach handbags, Marc Jacobs and Donna Karan?

The list is unlimited.  Johnson & Johnson promos on birth certificates.  Tax forms sponsored by H&R Block.  eBay ads for discounted auction listings is a natural on bankruptcy filing forms.  Transform all those programmable interstate highway signs that lay fallow when there are no accidents or Amber Alerts into a revenue source for limited time offers.

We’ve got an untapped source of revenue bigger than the Keystone pipeline can handle.  Ads, Baby, Ads!

For those who think Google-ize America! is crass commercialism, they can opt out…for a fee.  Advertising free tax forms, passports, etc. will generate even more revenue.

Now I don’t want to turn our country over to advertising any more than it already is so no advertising would be allowed within 1,000 feet of any registered lobbyist or television station. Let’s keep them fair and balanced.