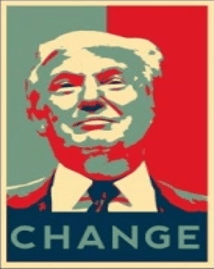 New leaders have an opportunity to drive change.  What we’re seeing on the national stage is a lesson in change leadership that not only challenges the status quo; it is an abject lesson in how not to lead change.

Trump’s emotional appeal worked well for securing the mandate to change but it’s killing him in execution.  By relying purely on positional power without a change strategy, he’s demonstrating what happens when you wing it.

I’ve gathered rules of thumb for change leaders from mentors, clients and students.  If Trump’s more successful than I expect, I’ll need to re-think them but until then, here are a few that Trump’s ignoring.

Trump’s thin skin, emotional tweets and bullying approach makes enemies out of who might be friends.  Dissing anyone who has a different perspective is not only offensive, it transforms change leaders into targets.  The steady drip of leaks is not a sign of love.

You can climb mountains or walk around them in the valleys.  Choosing replacing and repealing Obamacare put Trump head-to-head with the Democrats and approximately 20 million enrolled people.  Alternatively, Trump could have selected infrastructure which would be much harder for Democrats to oppose.

If change is your product, building market share is your goal.  Growing share beyond early adopters is essential for any change to gain critical momentum and achieve escape velocity.  Relying on repetitive campaign rallies to excite the already committed base doesn’t expand the market.

4.  Informal, cultural routines can kill you

Private sector leaders frequently deride those in the public sector as slow moving bureaucrats.  They are right because running a public organization is fundamentally different from running a private business.  Democracy is not efficient but like capitalism, it’s the best we’ve got.

The first job for any change leader is to scrutinize the forces that hold the current state in place.  Don’t think for a minute that formal authority matters as much as the invisible cultural norms.  Cultural change doesn’t happen by fiat.

In practice, change is usually added involuntarily onto already full plates.  The rookie mistake is to just get started over relying on the goal’s importance instead of mapping out a strategy.  To make change at scale, that plan needs resources: people, time and money.  Would you try to remove and replace your firms’ customer relationship management system with a slogan?

Some have suggested that Trump is being daring and decisive effectively following Facebook’s mantra of move fast and break things.  Problem is, that Facebook abandoned that mantra in 2014.

“We used to have this famous mantra…What we realized over time is that it wasn’t helping us move faster because we had to slow down to fix these bugs and it wasn’t improving our speed.”

Change leaders go slow at the start to finish fast.