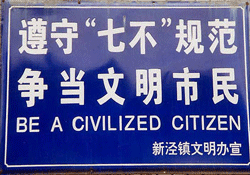 Apple’s iPhone 4 is a stunning product. It also has issues.  Consumer Reports cites it as the best smartphone on the market along with a big “but”.  The “but” is that while the iPhone 4 is very smart, it’s not a reliable phone.  They found a serious design defect with the metal strip antenna that runs around the outside of the phone.

A parallel issue faces Apple as a company.  It’s clearly among the best consumer electronics and marketing firms in the world; if not the best.  Using secrecy mixed with selective leaks and followed by brilliant advertising, Apple tells a great story.  The problem is they’re not very good listeners.

You can call it censorship, image management, or completely within Apple’s rights.  I call it stupid.  It’s as stupid as Clinton arguing about what defines sex during the Monica Lewinsky debacle.  The behavior insults the intelligence of current and citizen-customers.  Most importantly, it assumes we still live in a world where the only marketing is outbound.

As epitomized by the Emmy winning TV show Mad Men, outbound marketing is all about story telling whereas support forums, user groups and social networking are all about listening and interaction.  There is a thin line between telling a mesmerizing story and what I’d call “Svengali marketing”.  Svengali marketing occurs when the story becomes more important than reality.  That’s propaganda.

Basic cell phone problems on the iPhone are not new.  iPhone users have long complained about dropped calls on AT&T’s network.  Apple is not free from responsibility as AT&T is the only choice for customers in the U.S. due to their agreement with AT&T.  Additionally, iPhone voice quality has never been superior to competitors.  In fact, early reviews of the iPhone 4 complemented Apple on greatly improved voice quality; as long as they retained a signal.

Nor is the defect documented by Consumer Reports new.  Apple first suggested holding the phone differently would help.  Then they issued a software fix suggesting the problem was the indication of signal strength rather than reception itself.  Yesterday’s actions by Apple’s support forum moderators continue a pattern of not listening if not denial.

I would think that the enormous sales success of the iPhone would give Apple confidence to confront issues directly.  I can’t think of a company that has a more loyal following.  This should give Apple enormous latitude.  Please use it.

Next post: Leading Outside the Box:
The Outward Facing Organization