Look Out Apple!
Amazon’s Kindle Fire Will Be Successful 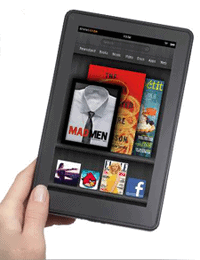 Granted, all of the above is based on first pass information from Amazon and first day reviewers.  Looks like it might be a tad heavy and battery life isn’t up to the iPad, yet.

And it doesn’t intend to diminish the continued success I expect the iPad will enjoy.  Apple loves what I call the “BMW” segment of the market; never the Toyota.

BUT, there is no way Apple will continue to own the entire tablet market – that’s the nature of competition.  Until now, we’ve had hardware companies offering iPad clones without unique content, pricing or capabilities.

With a clear customer POV,  Amazon’s Kindle Fire is your first tablet competitor.