The Internet’s New Normal: 4 Implications for 2011 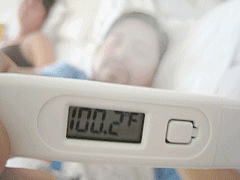 A seismic tremor rippled through the Internet this week.  Did you feel it?   The recent FCC decision opened the door for tiered service levels for wireless Internet while preserving equality among wired customers.  Just as the recession permanently altered some of our assumptions about the economy, the FCC action signals a New Normal for the Internet.

When I think of the technologies that making working wider possible, the Internet is at the top of the list.  At the same time, what it is and how it will evolve is rapidly changing.  This piece defines what I describe as the Internet’s New Normal and the implications this has for business and citizens at-large.

The End of the Open Range

The FCC decision licenses fence lines within the cyberspace commons.  Fence lines define who controls property and access.   Like farms and ranches, they start small and over time become agribusiness.  Fences create potentially create significant rewards for some, at the expense of many.

For example, the FCC’s decision was based on a “compromise” put forward by Verizon and Google.  Set aside Google’s “do no evil” claims; you can be sure that they, like Verizon, crafted this compromise based on their respective business models and future ambitions.  That’s how our country and capitalism works.  We have individual freedom but when it comes to major decisions, money speaks volumes.

Google thrives by offering free services supported by advertising.  They and their customers benefit from low access costs.  Verizon welcomes the demand for increased bandwidth and mobility but can’t recoup the infrastructure capital, service and maintenance costs by just supplying “fat pipes”.  They’re trying to augment their base access fees with “value-added” services but at this point, it’s not enough to cover the investment.  Hence the compromise of grandfathering wired access while enabling them and others to differentiate wireless Internet fees – which just happens to be the fastest growing segment of the Internet.

In America, we like the private sector competitors to battle these problems out under the assumption that competition will drive prices down for all.  That may not be true.  For example, the cost of health care in the United States consumes a much higher percentage of our GDP yet doesn’t extend life expectancy or improve quality of life proportionately to the higher expense.

The days of unlimited access and free content are rapidly fading.  A great example is the blatant declaration by the New York Times on their iPad application that it’s free for a limited time and starting in 2011 will require a subscription for full access.  The Wall Street Journal’s iPad app already charges a fee separate and above their electronic edition.  This year AT&T began charging wireless Internet customers different rates based on bandwidth usage.

This battle extends well beyond end users.  Just recently Netflix, Level 3 (they provide the optical fiber back bone that carries traffic between endpoints) and Comcast got in a snit when Comcast demanded an additional fee from Level3 for delivering Netflix videos.  Netflix’s business model is based on a low monthly cost ($7.99-8.99) for all the content you want compared to Comcast’s on demand charges of approximately 3.95-5.95 per video.  As Netflix increasingly streams content rather than mailing out DVDs, their pricing differentiation, and therefore the potential impact of increased access costs, becomes critical.

Now consider all the domains of business from media to travel where the transition to the web has shattered distribution, sales and service models.  Just as the airlines now charge for individual services such as meals, extra leg room and baggage, you can expect a similar evolution in the Internet’s New Normal.

Implication #3: Spontaneous government intrusion will increase in frequency and breath

National security, privacy and censorship are live wires that, like the global climate, are growing hotter each day.  In April, China hijacked 15% of all Internet traffic through its routers for about twenty minutes.  Espionage or accident – you decide.

We’ve come to accept that many countries in the world routinely censor Internet access.  For all the remarkable stories of how Twitter has helped those fighting for personal freedom, most people in these societies don’t have the skill to circumvent the censorship.

The people behind these attacks are technically very strong.  Regardless of motives and whether you agree or disagree, they possess the skills one would want in a cyber terrorist.  Hackers are no longer individual geeks with horribly wrong yet personal motivations.  You can bet every NSA, MI-5, or KGB equivalent around the world has their own team of skilled troublemakers.  We know they’re monitoring traffic right now; you’d have to be naïve to think that only China takes secret, nasty action.

Implication #4: Politics and purse strings will prevail over principles

Government has broad reach but little regulatory experience or mature frameworks for managing cyberspace.  Expect a wide variety of regulators (agencies, international bodies, states, etc.) to each take their shots.  These will be reaction and you can bet on lots of contradictory messages, actions and confusion.  If you think sorting out whether to extend the Bush tax cuts was hairy, just stay tuned.

In response, lobbying, politics, graft and corruption will increase as those who stand to win or lose fight for influence.  In the U.S. the carriers are the leading lobbyists followed by Microsoft, Oracle and HP.  Microsoft learned that importance of being heard the hard way when it faced monopoly charges here and abroad.  This explains why Google’s Washington presence is great than IBM’s.  Facebook and Apple lag yet you can bet this will change as their influence on Internet commerce increases. 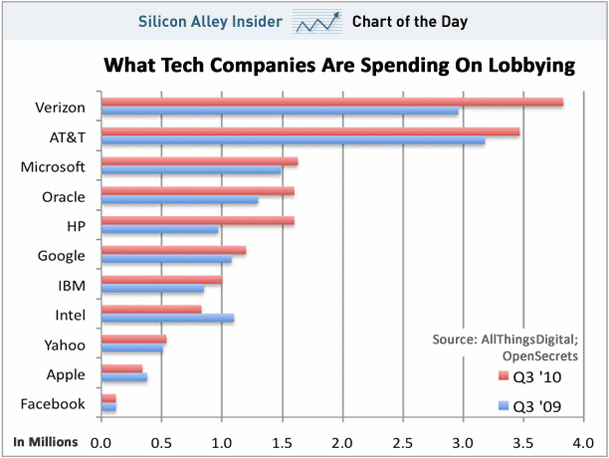 What’s missing from the above chart is that it doesn’t reflect how much industry at large is and will be devoting to lobbying.  For example, any large multi-national from Procter & Gamble to GE is increasingly dependent and will be subjected to the Internet’s New Normal.  You can be sure that as the Internet becomes a larger component of their cost structure, their voices will be heard as well.

Nassim Nicholas Taleb describes Black Swan events as having a dramatic impact yet being rare and nearly impossible to predict.  They are rationalized after the event as evidenced by the number of books dissecting how the financial crisis occurred while few predicted it.

In the context of history, few would have suggested in 1776 that the United States would grow to become the world’s most powerful nation in two hundred years.  In a parallel universe, today’s Internet is in 1780.  Where it will go from here has far more unknowns than certainties.  What I’ve described above takes us no further than 1782, if that.  It should be quite a journey!