A Perspective on 2013:
Looking for the Next Miracle of Scale 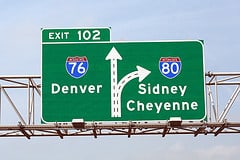 Almost one hundred years ago, Dwight Eisenhower departed Washington, D.C. for San Francisco as part of the first military convoy to cross the United States.  In July, 1919, most roads were unpaved and unimproved since settlers moved west.  Vehicles were slow, prone to breakdowns or tire failure. It took 62 days at an average speed of ten to fifteen miles per hour.

On June 29, 1956, Eisenhower signed the bill that created the “Dwight D. Eisenhower National System of Interstate and Defense Highways.” Today that system covers 46,876 miles including 55,512 bridges and 14,876.  It is a miracle of scale.

As we enter 2013, one of the most important challenges facing the world and business leaders are creating the next miracles of scale.

We need new miracles because scaling without proportionately increasing consumption is essential.  I shudder to think what will happen when the so-called developing economies reach development.  Can the world physically, politically or economically afford the per-capita amount of natural resources and energy that would be required based on today’s rates if we don’t create a new miracle?

Miracles of scale are about development; not size. It’s easy to get bigger (look at your holiday waistline) but getting better (i.e. fit) is much tougher.  The Internet, our most recent miracle of scale, is far larger than the Bell Network ever grew to in its prime but it’s far more intelligent and dependable.

Miracles of scale expand opportunity while increasing efficiencies. By arraying machines and labor in mass production, Henry Ford was able to increase the efficiency of production providing jobs and cars that were affordable by the middle class.

Miracles of scale transform complexity. Rather than clogging or collapsing under the weight of complexity, miracles of scale expose new opportunities.  For those of us who remember LP records, modern semiconductors enable us to put our entire parents’ collection on a single silicon chip.

Miracles of scale require systems of assets. Fueled by invention and investment, it is the combination of many small steps that creates giant leaps.  The cotton gin was an essential innovation but without power from a water wheel and eventually a hydro electric generator and grid, scaling could not occur.

Last, miracles of scale require aspirational persistence. Changing how the world interacts goes beyond creating a cool iPhone app such as Instagram.  It starts with aspiration but innovators such as Elton Musk illustrate the essential role of persistence (see previous piece on Elton Musk).

Why New Miracles Are Essential

We need the next miracle of scale because the complexity of human affairs is increasing as well as the cost of getting it wrong.  Familiar models of innovation focus on exciting young start-ups.  Remember, it’s only by achieving scale while managing complexity that today’s start-up become the next Facebook.

The same argument explains why economic and political experiments in small countries such as Denmark (population 5.5 million) is notable but with only one-third the population of Los Angeles, hardly comparable.

Nor can we find models in the agrarian past that inspired our Founding Fathers.  What New Year’s reminds us of is that time and civilization march on.  And we certainly need an approach to governance that gets beyond marching from one fiscal cliff to the next.

Below is an incomplete list of some of the potential next miracles.  Use the comments section to add your own.

This journey starts with vision followed by sustained investment – two factors that our human desire for instant gratification always fights.   I was in middle school when Kennedy asked us to go to the moon.  I had no idea what we’d do if we got there, what it costs and didn’t care.  We were literally going to go, as a nation, where no man had gone before; and that was exciting.

As leaders, parents and grandparents, we particularly need to raise the aspirations of the next generation.  Myself and everyone I’ve met who’s seen the upbeat, palpable surge of optimism within the developing world knows the difference.  In the developed world, we spend too much time talking about what used to be simple rather than conceiving what could transform how we live, work and play.