Getting Organized: The Entrepreneurs’ Death Star 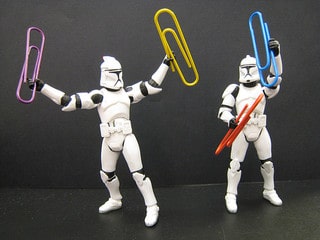 The goal of every startup is to rapidly outgrow startup size and status.  Few launch with an organization plan; nor should they.  A seminal moment occurs when the startup “gets organized” for the first time.  Like a baby’s first step, getting organized is a rite of passage.  Often begrudged, rarely is it questioned.

The journey is familiar: Assign discrete responsibilities, add a few job titles and channel work assignments to the dominant expertise.  Buying issues go to sales, HR gets recruiting and so on.  Congratulations…you’ve built your first silos.

Each silo needs a leader plus an uber-leader to integrate them.  Meeting hours increase to bridge what used to be integrated.  Dittos on the congrats…you’ve got hierarchy.  Soon you’ll have processes and then process improvement – it only gets better, huh?

This is the organization trap and left untouched it will expand not because it’s effective but because it aligns with what the cutting-edge brain research tells us about how our brains and emotions work. It’s a trap because it creates a status structure that protects people from threat and uncertainty while simultaneously salting in a little social interaction and functional autonomy.

It gets worse: the latest research on decision making tells us this journey often feels better than it delivers. Hierarchical structures facilitate repetitive operations and control (think volunteer army) but drive the soul out of innovating.

It presents leaders with a wicked problem:  what our brains embrace as normal, rational and better than chaos becomes an addiction that silently metastasizes across all work.  It seems like the only options are to stay small and creative, suffer chaos or pick execution over agility.

This piece argues that organization need not be a death star that sucks innovation and entrepreneurism dry.  Today I’ll build the argument.  In a follow-up piece, I’ll give four alternative examples.

As summarized by David Rock’s SCARF model (Your Brain at Work), our brains seek status, certainty, autonomy, relatedness and fairness.  Just as a castle protects the King from outside threats, well-defined roles and hierarchy put a protective structure around our collective organization psyche.

Where safety and security are most critical, hierarchy works well.  Chinese border officials have seized nearly 20,000 pounds of powdered milk and arrested 879 people for breaking a new law that limits how much travelers to Hong Kong can bring back to the mainland.  After 22 Chinese companies sold dairy products containing toxic chemicals, Chinese parents are desperate to get their hands on foreign-made baby formula manufactured under more stringent controls.

But startups live in a world of turbulence and change.  Hierarchy is better for addressing known problems than unearthing tomorrow’s opportunities.

Functional leaders are more likely to protect their status than nurture a new idea.  Change threatens the certainty of roles and standard operating procedures.  Specialization creates functional autonomy that feels personally productive but inhibits delivering truly encompassing value to customers.  Fairness in controlled hierarchies is a consequence of benevolent, servant leaders rather than an inherent trait.  In fact, the best leaders are those that know when to rise above the forces of hierarchy, and still survive.

A dominant theme in the entrepreneurial and decision science research it’s that what most think of as expertise is grossly over-rated.  In Decisive, Chip and Dan Heath cite Phil Tetlock’s research on 82,361 predictions where even the best forecasters did worse than crude extrapolation of current trends.  In Tetlock’s own words:

Surveying these scores across regions, time periods, and outcome variables…it is impossible to find any domain in which humans clearly outperformed crude extrapolation algorithms.

Entrepreneurs seem to know this intuitively.  60% of INC 500 CEOs did not write a business plan before launching their companies.  They began their business as a grand experiment – what will people pay for and can it grow beyond startup scale?  Build, deploy, measure, learn and adjust.  Rinse and repeat.

Getting organized puts forces in motion that cement it in place.  Faster than we expect, hierarchy nurtures what the Heath’s describe as the four villains of effective decision making:

Reconciling Business Experimentation with the Brain

Hierarchy isn’t the only way to keep our brains satisfied.  For example, here’s how leaders can structure experimentation to address status and certainty.

Functional experts aren’t going to embrace experimentation over expertise just because the boss thinks it’s a great idea.  People need to have confidence in the experiment protocol.  Start with establishing goals but make absolutely sure there are actionable measures before launching. Without such agreement, any subsequent discussion will deteriorate into intellectual rugby as individuals tussle with their inidividual interpretation of the data.

Next, leaders need to reset the purpose behind experiments.  While we’d instinctively like every experiment to be successful, besides not happening, that’s not the goal.  Therefore, if two competing approaches are tested concurrently, awarding only the winner sends the wrong message.  Instead, praise those who produce the most actionable insights because detecting where not to go is just as important.

Finally, people who drive learning forward to the next experiment are the real heroes.  As Tracy Kidder explained in his classic Soul of a New Machine, good experimenters are pinball enthusiasts; constantly seeking the next free game.

What about our brains’ quest for certainty?  Doesn’t experimentation fly in the face of certainty?

Not necessarily.  The methodology of experimentation is rock solid.  Framing and testing a hypothesis is something we all learned in high school science classes.  It’s when we focus on judging outcomes instead of valuing incremental learning that uncertainty takes center stage.  If we did that in universities, they would be asylums for the habitually depressed instead of stimulating learning environments.  What makes research exciting is progress over time.

Google has a well-deserved reputation for seeming like an extension of a modern university.  With perks that include a consistent stream of thought-leaders across society, Google employees are continuously exposed to the next possibilities while they run their business based on probabilities.  At Google, good science and good business co-exist.

Lose the Baggage; Not the Emotion

Aspirations, or what Eric Ries of Lean Startup refers to as Leaps of Faith, are the spirit of startups be they in Cedar Rapids or Silicon Valley.  Look before you leap so that you get another chance to leap, hopefully better each time.  Be clear: leaping trumps creeping along the edge with endless analysis.

In the next piece, we’ll look at leaders who are trying to institutionalize this in their firms in line with how our brains work.