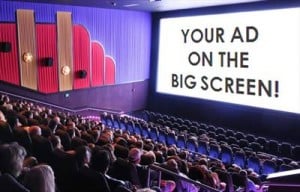 Instead of watching Washington pundits dissect the AP-IRS-Benghazi drama closing in on No Drama Obama, I went to an action movie.  I couldn’t help but notice two things.

Imagine the horror of sitting in a semi-dark movie theater waiting for the show to start.  Many have their cell phones out but leaving a screen blank in today’s “second screen” world seems as unsettling as dead air to a radio talk show host.  The chances of spending a third of your movie theater time with advertising masquerading as entertainment is the new normal.

Between the pre-preview ads and previews (now called “trailers” for some crazy reason), going to the movies is like joining some perverted version of being adopted by a Neilsen family:

On to the trailers!  The message is clear: We are doomed. If you didn’t think the world was coming to a creepy end in the original Hunger Games, you’ll have another opportunity in the sequel.  If World War is your fare, you can have it with zombies or without.  And if you’d rather step back from man’s inhumanity to man, you can still go apocalyptic as the citizens of earth join to together to keep aliens from taking over the planet.

For those who thought they were leaving the dysfunction of Washington behind, fear no more as the White House and Capital are under attack in June.  I’m talking missiles; not pundits.

Of course, with the world coming to an end, we can only be saved by an alien, Superman, now re-positioned as Man of Steel.  If he fails, we can seek shelter elsewhere as Will Smith creates a new home for mankind on Nova Prime.  (Smith’s arrival likely starts a birther movement on Nova Prime setting up the inevitable sequel.)

Perhaps we’re terribly depressed and these movies will prepare us for our demise far better than any forewarnings of the Rapture.  Alternatively, maybe we’re doing pretty well so that annihilation is so crazy that it’s entertaining. Of course the reality has much more to do with restless impatience of the action movie demographic:  young male consumers, far from mortality.

It’s ironic that we go to the movies to escape as we’re subjected to ads and content that in their own way, suggest there is no way out.  Drama requires tension.  Life or death struggles are always compelling but the implicit message at today’s theatre could just as easily be “buy or die”.  Maybe that’s the next action flick:  follow Brad Pitt on his quest to use his credit card to the limit before aliens seize him.