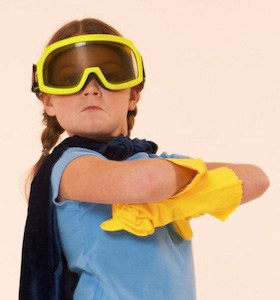 President Obama discussed with comedian Mark Maron how the ups and downs of six years in office had made him a better president (paraphrased below).

As you get older, you might slow down or not jump as high as you used to.  But I know what I’m doing and I’m fearless.  This is not pretending to be fearless. Part of that fearlessness is that at this point in life, I’ve screwed up a number of times.  I’ve been in the barrel tumbling down Niagara Falls and I emerged alive.   You lose the fear.

I was struck by Obama’s tone and timing. In that instant, Obama was freestyling his thoughts as a rapper would lyrics.

Obama’s comments caught my attention because fearlessness is as elusive as it is attractive. For me, the opposite of fearlessness is rarely fear but the overuse of rational thought. As long as I stay with analysis, I’m protected from experiencing the results of doing something.  I may not succeed but I’m also guaranteed not to fail.

Few will argue with getting more facts.  That would be foolhardy, not fearless. Right?  Perhaps, but we’ve all reached that point where the insight gained from additional facts begins to wane.  The cost of delay becomes obvious.  What about those decisions where the cost of delay was higher before it became obvious? That’s where fearlessness might help.

Then there’s the bias that decades of critical thinking in academia, consulting and executive roles adds to my worldview.  My “what if” analysis starts with an unstated bias that highlights what could go wrong.  I can’t think of a pitch meeting with an entrepreneur that didn’t eventually turn into a grilling about such scenarios.  Rarely do these meetings begin by looking at what opportunities they might have missed in the “what if things go right” setting?

This could suggest that being more optimistic and action oriented is core to fearlessness.  Perhaps it is, but not if it overrides using our experience.  Experience and logic determine how we make sense of facts.

Obama’s decision to launch the Bin Laden raid provides a good example.  According to Robert Gates, Obama’s more experienced and conservative Secretary of Defense, Obama described the dilemma as “a fifty-fifty situation no matter how you look at it.”  With far more experience, here’s how Gates viewed the same set of facts:

Gates summed up his concerns, “It is a compelling case, for what we want to do. I worry that it is compelling because we want to do it.”  What he did next speaks loudly to both his and Obama’s character.

Gates then told the President that perhaps his experience was doing him a disservice because it made him too cautious. Obama forcefully disagreed, saying that Gate’s concerns were exactly what he needed to take into account as he weighed the decision.  Obama’s fearlessness didn’t come from avoiding the facts as stock Hollywood hero footage might lead one to believe but by embracing them.  Both men knew that not advancing might enable Bin Laden to escape again.

On April 28, 2011, President Obama polled his team.  Gates voted for a drone strike.  The following morning, two of Gate’s aides appeared to try and get him to support the raid.  After further delibeations, Gates called the President’s office to tell him he now supported the raid.  Obama had made the go decision an hour earlier.

Obama described his personal fearlessness.  Just as important for leaders is how to evoke fearlessness in others?  George Fisher, CEO of Motorola when they were at the top of their game, defined leadership as getting people to do that which they would not ordinarily do. It’s my favorite definition of leadership because it captures the toughest leadership challenge: inspiring change.

This is where optimism really matters. I couldn’t think of a fearless leader who wasn’t optimistic.  In fact, while exceedingly demanding to the point of being abusive, successful leaders such Steve Jobs and Elon Musk evoke followership because of their confidence. Being fearless and pessimistic are incompatible.  But fearlessness takes more.

To pull others along, fearlessness has to reach beyond the facts of the moment.  When facts speak loudly, the risk-reward equation is self-evident and lends itself to broad communication.  Fearlessness embraces a higher calling that overrides people’s natural fight-flight instincts to step into a risky void.  Fearless leaders incite something in others that enables that first step.

Fearless leaders don’t stop at the first step.  They widen people’s definitions of success and failure beyond win-lose.  Long before cross functional teams were the standard approach for innovation teams in high tech, I worked with Quantum hard drive President David Brown to transform their product development from a traditional serial and functional approach to what many viewed as a radically inspired team structure.

Brown’s fearlessness was not based on overwhelming confidence that we had the perfect answer.  Rather, he openly declared that there would be some bumps along the way that would require adjustments.  What they were, he didn’t know but he was confident that we could make course corrections.

Queries are questions that Quakers use to guide self-examination.  Rather than the “thou shalt or shalt not” rules of most religions, queries are a framework within which Friends assess our convictions and consider the direction of our lives and the life of our spiritual community.

This piece ends with my queries rather than answers.  Add your own.

Next post: Clone ‘Em: Bring Instant Leadership to Your Company