Lean Into the Future

In the word’s of Hollywood’s Jack Bauer from 24,
the events you are about to see happen in real-time 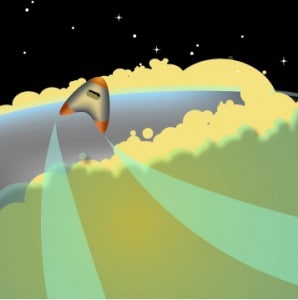 We live in the moment.  It’s the only reality we have.  We can be trapped by it as well.  When we are trapped, we hang on to the moment.  We repeat it.  It’s the exaggerated hell of Bill Murray’s Ground Hog Day … all over again.

What would we do if there was no Internet?  Mike McCue asked this and invented Flipboard, the first app that uses the transcendent power of Apple’s iPad.

What if there were no PCs?  Ray Ozzie, the visionary behind Lotus Notes leaves Microsoft with a rope-a-dope punch that asks us to comprehend a world filled with continuously connected, disposable devices.

What if there were no us?  Alan Weisman asked how would nature respond if we weren’t here in The World Without Us.  It appears that everything else thrives.  Could that suggest how we might alter our presence on the planet?

What if there were no patents?  Patent protection has grown far beyond its original intentions.  Apple’s iPhone success has evoked a spat of lawsuits that will consume minds and money over what?  Are we trying to roll back innovation or stimulate it?

What if there was no fear?  Fear straps us to what we have and might lose rather than what we could create and gain.   Fear is 10% unemployment.  Fear is bulging debt.  Fear is getting passed and not having what it takes to bridge up to the leaders.

Clutching tightly to the present only works when the world stops changing.  That’s not happening.

Leaning into the future thrives on optimism.  It’s looking forward to the next sunrise rather than blurting “thank god, today is over”.  It’s seeing more in front of you than behind you.

For us mortals, the cycle of life biases us to conserve as we age.  Get out of stocks and into fixed income.  Watch your step so you don’t fall.  Protect our existing business model.  Do another derivative.  Bring back television’s Hawaii Five 0 and the Defenders.

It’s too bad we’re not immortal.  Then there would always be more in front!

This election is really about the emotions of change.  Our present isn’t that good, the future doesn’t look much better so many want to go back to the past.  The Tea Party wants to recreate a legacy; a way-of-life that’s no longer to be had.  We can’t go back to gas at $.39 a gallon no matter how much we drill.  We may dominate the world militarily; but it’s economics that rules and we’re not doing so well there.

Why go back to a past that we can’t reach or afford?  Cut loose the overly rich public sector pension plans that ask us to pretend the future isn’t coming.

Initiative crafts the future.  We will repeat the present and the past if we don’t experiment.  We can’t predict success but not experimenting locks us in place.  Pick your fallen empire.  The secret sauce of America is transformation.

Questions like McCue’s, Ozzie’s and Weisman pull us over the next horizon.  They unleash the energy to envision a new future.

Those at the edges are doing this every day.  They lean forward without being distracted by those that whine about the past.  Each is a mini-Richard Branson selling tickets for their own version of space travel on Expedia while the sunset crowd re-writes their legacy.