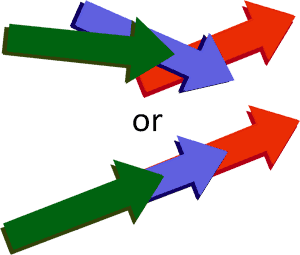 Shortly after receiving the birth announcement of my fifth grandchild, Ms. Clover Newton, I watched Fareed Zakaria ask his studio audience if they thought their children would be better off than they were.  Not one hand went up.

Welcome to the world Ms. Clover.

As a nation, we are losing our competitive edge as we argue amongst ourselves

Some days it looks like the United States has been taken over by a private equity firm.  We’ve loaded up on debt and deferred maintenance of hard assets such as infrastructure and education.  The financial specialists (e.g. wealthiest Americans) are getting richer as they cut the number employed while proudly citing the productivity improvements.  Many who are laid off want their old jobs back rather than proactively investing in the skills that will make them competitive in the future.

If I contrast this to the United States I grew up in, what stands out is the degree of investment we collectively made in the future.  After the trauma of WWII and fortified by the Cold War, we pulled together against a common enemy and looked beyond our self interest.  We taxed ourselves at nearly three times today’s rates, built the interstate highway system, expanded state universities and sent a man to the moon.  We were aligned; not gridlocked.

Now, with no clear enemy in sight, we’ve turned on ourselves.  The Obama election lurched left, this time we lurched right.

The new enemy is global competition.  It’s not just China but Brazil, Russia, Singapore and every other country that sees a better future in front of it.  Today’s playing field is wider; the competition is bigger and faster.

This piece argues that gridlock in the midst of a global re-structuring of economic power is self-indulgent.  I argue for putting the restoration of our economic competitiveness at the top of our national agenda and offers some suggestions re-alignment.

Why?  So Ms. Clover and all our grandkids can have it better.

Who Thinks Gridlock is a Winning Strategy?

I defy you to name a CEO who advocates gridlock as competitive strategy.  Gridlock is defense.  It’s what you do to hold on to what is or was.

Gridlock reflects our national confusion and contradictions.  Republicans are calling for spending cuts as the Federal Reserve launches a second Quantitative Expansion that’s nearly the size of the original TARP.

We mistakenly project the problem on Washington when it’s really ours.  David Brooks underscores this in a recent column.

On the one hand, people are living with the daily grind of getting by on $40,000 a year, but they’re also living with Xboxes and smartphones. People in these places have traditional bourgeois values, but they live amid a decaying social fabric, with high divorce rates and skyrocketing single parenthood numbers… (they) distrust government but still look to it for help. They disdain Wall Street but admire capitalism.

Gridlock didn’t matter as much when the competition was weak.  Now, they’re pulling away.

The Power of Alignment

In traffic, gridlock is too many vehicles trying to go in different directions.  In democracy, gridlock is the expression of individual rights driven by self interest.  The right defines self-interest as personal freedom; the left wants collective well-being.  The conflict goes back to the founding fathers.  Federalists like Hamilton constantly battled with states’ rights advocates such as Jefferson.

But when the Constitution was written in 1790, the world had not entered the industrial revolution never mind the global knowledge economy.  As the half-live of knowledge continues to shrink, the sources of competitive advantage change rapidly.

A cornerstone of America’s competitiveness has always been innovation.  In a global study on corporate innovation practices, Booz Allen Hamilton authors underscore the importance of strategic alignment.

We are in the midst of a structural change that calls for a fundamental new alignment that meets today’s competitive realities.

We can do better .  Here are four strategies to re-align and forge a national competitive strategy

1. Establish a “moon shot” goal for the wireless world.

Mobility is increasingly at the heart of global competition and for the sake of argument, I’ll assume we will catch up to others in our wired bandwidth speeds.  Let’s leapfrog the competition with wireless speed, security, software and devices.

2. Increase by 10x the funding for Obama’s proposed innovation hubs

3. Reframe revitalizing education from a children only issue to include mid-career adults.

Competing in the 21st century requires out pacing knowledge erosion across our society.  Just as President Kennedy had us walk 50 miles for physical fitness, let’s address our total mental fitness.

4. Use tax incentives, military and universities to identify and tackle some of the best opportunities on the horizon.

We’re now competing against autocratic economies such as China that can make bets much faster than our democracy.  Will we guess wrong?  Absolutely, but let’s take some chances, use the evidence and pursue the one’s that work, drop those that don’t.

How do we pay for this?  The weight reduction business makes a lot of their money by selling their own food because what’s generally available is too fattening.  They don’t taste as good but these “reality cookies” help.

As a nation, we have to eat some reality cookies.  This about math; not ideology.  We can’t afford to buy everything and we have to save and investment more.

We all live longer and therefore can work longer.  I know few who seek the couch over making a contribution.  So let’s raise the retirement and benefits payouts accordingly.  Tackle the absurdity of outsized public pensions.

Stop policing the world on our own.  No more bogus “coalitions of the willing” where we pony up hundreds of thousands of troops while New Zealand offers sixty-one.  If we can’t convince our allies, then we should seriously question our own thinking and evidence.

Redefine what is discretionary spending to include defense.  With a budget that’s equally to the aggregate spending of the next 27 nations, we’re supporting military defense at the expense of our economic offense.

If we don’t do this, you tell me how I break it to Ms. Clover Newton that things are going to get a lot worse.