Apple New Product Introduction:
Welcome to the Planet of the Ape 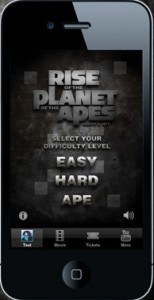 In a couple of hours, Apple executives will take to the stage.  And millions will be watching because part of our love for Apple is being co-conspirators in the OMG introduction process. While reverence for Steve Jobs will keep “incredibly insane” product descriptions off the table, expect to hear the word “amazing” more than once.

However, mystery is not about what will happen as much as it is when it will.  With a gargantuan global supply chain that’s impossible to maintain airtight secrecy, we are reasonably certain that Apple will introduce larger phones, a wearable device with some activity/fitness virtues and drive both towards the next iteration of an electronic wallet.

Let’s leave the details and guessing of what the execs will say to the other pundits.  Instead, I’ll focus on the three questions lingering in the global audience.

To many, this is Cook’s last chance at the high bar set by Steve Jobs.  It will come down to the new personal device, presumed to be a watch.  Will it be me-too in design and functionality or does it take Fitbit, Samsung, LG and the other first entrants to a serious new level?  If it does, I bet that the magic will come from the services behind it more than the “cool” design.  First generation wearables haven’t been more than curiosity pieces because they just don’t offer enough value.

Bottom line:  Cook will never pass the innovation on device design.  Even if spectacular, credit will and should go to those who live and breathe design such as Jony Ive.  Cook excels at expanding the iPhone platform to cars, wearables, home, health, etc.  That’s big money, but it’s not sexy design.

2. Will the new iPhones seriously do more than catch up in size?

Let’s face it, when it comes to form factor, Apple’s playing catch-up.  Small was good when the functionality accent of smartphone was on the second syllable.  Today people are texting and watching more than they’re calling.  Can launching a robust network of service providers using NFC (Near Field Communication – a capability for communication to close things such as cash registers, tellers, toll takers of all kinds) be enough differentiation to make the new iPhone essential?  Siri was supposed to do that for the iPhone a couple of models ago…how’s that working?

Bottom line:  This also isn’t a device issue.  Hardware is a tactile touch point but it’s the value of new services that really matters.  Can Apple fundamentally change our attachment to the wallet as it did to music CDs or Amazon’s Kindle did to paper books?  That’s what we should ask after today’s announcement.

3. How much will Tim Cook’s Apple share revenue with others?

Let’s assume that the rumors of “electronic wallet” agreements with American Express, Visa, Nordstroms, Walgreens are directionally correct.  The real innovation for Apple will be coming to a revenue sharing alliance that expands the garden walls rather than raising them.  Taking 30% of each transaction as iTunes has done won’t work.

Bottom line:  This is where we’ll see the biggest news.  As an industry and new global commerce gorilla, Apple cannot expand disproportionate pass-through premiums.  There are known options such as Android/Google, and known, unknowns brewing in startup incubators across the globe.

This is where Tim Cook adds enormous value.  The passion and arrogance of Steve Jobs served Apple very well in the past but Cook’s ability to cooperate is now a competitive differentiator.

Besides, the inhabitants of any planet get pretty upset when apes’ get arrogant.