The Future of Content:
Old McDonald Had A Farm: G…O…O…G…L…E 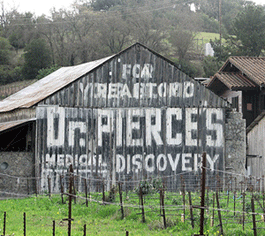 I grew up near Cow Lane so when I think of farming, my mental images is barns and cows.   Constant recitals of America,The Beautiful in grade school enable me to see an occasional waving field of grain in the background.

Fish farming?  I get it but that just raises my interest anytime I see “wild salmon” on the menu.  There’s something about fish and the ocean that I’m unwilling to separate.

But content farming?  What the heck is that?  It turns out that content farming is a remarkably insightful business opportunity that’s enabled Demand Media to launch a successful IPO this week.  And they’re not the only ones.  There’s Answers.com, wikianswers.com, Howcast.com and others.

Content farming has the potential to do for content what McDonalds did for food.  Depending on your feelings towards the Big Mac, this may signal a new beginning or the beginning of the end.

Like everything else on the Internet, the content barn is virtual.  Demand Media has a network of 6,000 writers, filmmakers, title proofers and copy editors scattered across the globe.  Just as the industrial revolution obliterated craft guilds in favor of mass production factories and piece work, so goes the content creation.  For approximately $15 a story, freelance writers generate content based on a list of topics provided by the content farm.  Freelance copy editors clean them up for before posting.

To make a living at $15 a piece, a writer has to knock out 3-4 these pieces an hour.  If I compare this to the time it takes me do complete a working wider piece, I’d quickly be on food stamps!  Video works the same way for a slightly higher fee.  Comparatively, this isabout 1/3 of what traditional media pays reporters.

The output from just Demand Media’s barn is 4,000 new pieces per day and rising.  We’re not talking Pulitzer Prize in content, style or research but don’t tell that to the 6,000 freelancers.  Like  Detroit autoworkers, they are just as committed and careful in what they do.  Ultimately, it’s the content farm model we should question but not quite yet.  Let’s understand the impact the content farm has.

Here’s where the business genius comes in.  Demand Media’s founder & CEO, Richard Rosenblatt recognized what we all know: it’s incredibly tough to charge anything, never mind a premium, for content on the web.  That may be changing with tablets.  Players such as the N.Y. Times are introducing new “pay walls,” but for the most part, web content is not worth much.  Content farms concentrate on reducing content cost through re-use and smart mass production.

The critical change is mass production.  Up the pragmatic, snappy answers and ditch the open questions and artistry.  Answers.com has 31.8 million pages indexed in Google which is only 11% less than Wikipedia.  Demand Media’s eHow.com has over four million pages and lists 170,000 videos on YouTube.  That’s twice the content of CBS, AP and Al Jazeera combined!  In July, 2010, Demand Media held #24 ranking in web site visits.  By September, they were up to #15.  It’s likely that they’re in or near the top ten today.

In the beginning, Demand Media used human editors to select topics for the freelancers.  Anyone who’s worked in a high volume factory knows that cost reduction, productivity improvement and efficiency are the keys to sustained success.

Who Eats This Stuff?

Farmers plant what people and animals eat.  Content farmers plant what users want.  As Demand Media’s algorithms prove, there’s no value in judging what they should eat – just give ‘em what they ask for.  Just as high sodium foods taste good at McDonalds, so do six-step action plans in a one-page on how to start a home bee-hive, build a doll house or craft your first marketing plan.  You can bet that within the first page of Google search results, you’ll find a “how-to” from a content farm.

As they say on TV infomercials:  But there’s more!   Think of all the other web sites out there that are vying for visitors.  Lance Armstrong’s Livestrong.com needs health and cancer fighting content.  The Atlantic Constitution’s online edition needs to expand its travel content and as we know, reporters are far more expensive.  Both use content farm output to draw visitors to their sites and in doing so, hope they might show up just a little higher on search results.

The farms will tell you users come to their sites because their content has good quality and value.  This is just as true for the content famers as it is for the fast food merchants.   McDonalds has sold 245 billion hamburgers to people who approve of their value proposition to the tune of $23B in annual revenues.   That’s approximately ten times greater than the N.Y. Times.

The Google Connection:  A Symbiotic Relationship

Content is the bait that search engines put in front of users after every search.  Recently Google has announced that it will tailor its algorithms to minimize the disproportionate impact the sheer volume of content farm product is having on search results.  But let’s remember: the sign on Google’s front door says “search” but what they sell in the back is advertising.  Consider the synergy between the content farm and YouTube.

The Future of Farming:  Where Are We Heading?

Customers always define value.  For wrapping fish at an open air market, dirt cheap paper offers a fine value proposition but when Jeff Koons turns out his next million dollar masterpiece, we expect artist grade stock.  Value depends on customer needs and there will always be a need for cheap as well as high priced content.

Just as we worry about the impact of fast food on our society’s overall health, we should also question the impact cheap content has.  Is fast and good enough becoming the expectation such that we would no longer recognize the great if we saw it?  Has the overwhelming breath of the Internet driven us to look no further than first page results on any search engine?

A presentation I attended at Stanford’s Work Technology & Organization symposium described how in academic research, search engines are leading researchers into shrinking orbits of thought.  Algorithms such as Google’s Page Rank depend on popularity: i.e. how often is the paper cited or referenced.  That which is already known and popular is far more likely to be rank high than the outlier or contrarian idea.   The net effect is that questioning assumptions becomes harder to do.  Over time, will we lose our ability for the critical thinking that uncovers a critical false assumption if we only see the convergence of current thinking?

On the other hand, do content farms provide a service by spreading basic knowledge just as Henry Ford’s Model T increased access to affordable transportation?  Ford also provided employment to thousands.  Are the content farms creating a similar opportunity for the writers and video producers who are among the victims as traditional media companies downsize as they cope with the dislocation caused by digitization?  As overall corporate employment shrinks across nearly all industries, are virtual content farms an improved freelance model that can extend beyond web content?

At this point, the questions outnumber the answers.  In the meantime, Demand Media’s business model and IPO give new meaning to the term “cash cow”.  Perhaps they’ll find the answer and explain it with six action items?

Next post: The Apple Fortress:
How Apple Paces Profits Beyond Platforms