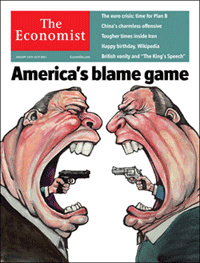 While Monday’s news of Apple CEO Steve Job’s leave-of-absence grabs most of the headlines, another Apple story broke late last week that will have more immediate impact.  Apple has told newspaper and magazine publishers that starting April 1, subscribers to print versions of their publications cannot be offered free iPad editions.

As today’s market gorilla Apple is flexing its muscles but this gets personal.  I love the Economist.  You won’t find a better combination of global coverage, sharp writing and insight into our world.  As a print subscriber, I currently get the Economist iPad edition for free.  I also subscribe to the Wall St. Journal on line but if I want the iPad edition, I have to pay separately for that subscription.

As Paul Simon warned us about Kodachrome, please don’t take my Economist away!

Others must feel the same way.  Almost immediately, Belgium has open an investigation challenging Apple’s action as an abuse of their dominant position in tablets.   Readers of WorkingWider.com will recognize Apple’s action reflects Apple’s business model of  high editorial control and closed system in contrast to the lower control/open marketplace created by Google’s Android.

Perhaps the Belgium investigation and publisher push back will cause Apple to change its decision but in the meantime, here’s what’s in it for Apple.

Apple’s action also reflects the changing importance content distribution has in their business model.  As noted in Apple Business Strategy 2011, 2011 is likely a year of incremental product development for Apple.  However, one can’t help but notice Apple’s increased emphasis on increasing content revenue through vehicles such as the forthcoming MacStore.   A recent analyst report asserted that Apple revenues from the sale of add-on features to already purchased iPhone content has increased by  41% .

That said, Apple is in danger of a serious overreach.  Their editorial judgment and control serves their hardware platform customers.   Unlike open architectures which have to compensations for multiple configurations, suppliers, user settings, etc., Apple injects Martin Scorsese-like direction that yields passion, excitement and elegance.  But like the choices made by any artist, Apple products also have their quirks.

When there are few alternatives for their platforms, as is currently the case with the iPad, customers put up with choices such as starting an unnecessary war with a web standard such as Adobe Flash.  That war ended last September (see Apple’s New Platform Citizenship).  But here we go again.  I’d expect as competitors respond, technology and markets evolve, Apple may change direction again.  In the meantime, their choice runs into two problems.

First, as competitors respond, the differentiation between Apple and others is a far thinner margin than when first introduced.  Windows 7 and the current Macintosh operating systems are quite comparable according to the Wall St. Journal’s Walt Mossberg, a strong Apple advocate,.  Similarly, the differences between the iPhone4 and the latest Android models are diminishing rapidly.

The second problem is that exercising editorial control and differentiating Apple hardware is easier and more natural than doing so with others’ content or through services.  Content creators such as The Economist have their own perspectives, business models and property rights.  Content providers want to maximize viewers regardless of device.   Differentiating services is also far more difficult to do or sustain.  A streaming video served up by iTunes is no different than that delivered by Netflix, Amazon or Comcast.

One thing you can count on is this decision will be tested and evolve as publishers and competitors react.  Just as the computing industry saw Microsoft and Intel take the lion’s share of value, publishers are not blind to how Apple inserted itself into a dominant control position in the music industry.   Google, Amazon and new tablet manufacturers will quickly respond with alternative proposals and terms.  I just hope they hit a nerve before the April 1 issue of the Economist comes out.

In the meantime, my heart goes out to Steve Jobs and his family.