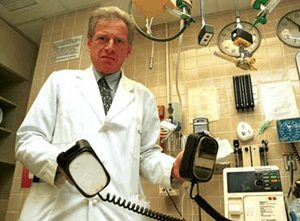 Anyone who’s watched a medical drama on TV knows when someone yells “paddles” in the ER it’s a crisis.  Everyone stands back as  high voltage charges the paddles, someone shouts “Clear!” as the shock rips through the patient’s chest hoping to kick start their heart back to life.

It’s time we did that to our economy.

Let’s go beyond the less than dynamic duo of “cut taxes” and “increase stimulus” that sucks up the oxygen while President Obama looks for some pragmatic epiphany in between the two.  This is like telling the ER patient that the right combination of diet and exercise will bring them back to life.  We need more and we need it now.

Business leaders are not hiring because there is not enough demand for products and services. If demand was rising faster than their ability to deliver, they’d hire.

Stop right there.  The other arguments are side dishes.

Yes, it would be nice to have more clarity about taxes in the future but if demand were roiling, business leaders wouldn’t let taxes stop them.

And technology has changed what jobs require people and what people need to know to get a job.  But technology also creates new jobs.  Things still break, need to be upgraded and maintained.

And while regulations can constrain business in stupid ways, the economic crisis showed us that business can act pretty dumb when left on its own.  I’ve never seen a company turn away demand due to regulation.

What Happened to Demand?

Demand occurs when lots of people have excess money to spend.  “Lots” means those other than the rich.  Outside of Germany, the developed world’s middle class is tapped out.  They’re mired in debt, can’t borrow against their homes anymore, and with mortgages underwater, they can’t move.

The response to date from the banks that extended easy credit is to resist participating in any of the so-called mortgage relief programs, foreclose (legally and illegally) and at best, extend terms.

Let’s play that out.  The mass of potential customers are in over their head so the response is to drain just a bit of water out of the pool.  Great, now they can stand on their tip toes and not drown.  At the same time, by stretching out the terms, we lengthen the pool so it will take them longer to get out.  This makes as much sense as bloodletting to cure infection.

Restructure the Middle Class As We Did Wall St. and GM

If you find yourself bored at one too many summer picnics, grab your drink and say with gusto, “How ‘bout those bailouts of Wall Street and General Motors?  Weren’t they great!”  You will agitate even the sleepiest crowd.

In fact the bailouts worked pretty well.  The banks avoided the abyss and GM used the money combined with bankruptcy to restructure costs such that it is now profitable with smaller cars and volumes.  The payback from both has reduced what looked like an enormous investment to a reasonably good deal for society overall.

Did some folks gain while being overly greedy, stupid or worse?  Yes.  And no one likes having a gun put to their head by those that screwed up.  That was the case in both instances.

But does that mean we should wait for the middle class to get to the same place?  Remember, without the middle class, there are no  steady customers.  Do we really want a barbell society of rich and poor?  That can get ugly.

I don’t recall seeing “London Riots” in anyone’s 2011 New Year’s predictions.  Perhaps Britain’s 20% unemployment among young people isn’t the direct cause but it strikes me as not very different from smoking while filling up your gas tank.  The vapors can catch at any moment.

When unemployment rises, opportunity falls.  When unemployment gets stuck at a higher level, people switch from embracing the future to fighting to regain their past.  Just compare the vision embedded in the early campaign rhetoric of “I want my America back” to Jack Kennedy’s “sending a man to the moon by the end of the decade.”

Do you think we’ll find the future for our grandkids in the rear-view mirror?

Debt Forgiveness:  A Piece of the Answer

It’s time to charge and put our economic paddles on chest of the middle class just as we did for Wall Street and GM.  As argued elegantly by Peter Coy in this week’s Business Week, we can begin by restructuring a big piece of consumer debt: home mortgages.

As of March, twenty-three percent of the mortgaged residences in the U.S. were worth less than the mortgages on them.  Restructuring this debt essentially halts foreclosures and stops the growth of vacant, nearly unsellable homes.  We’ll also put an end to the understandable but ethically unhealthy practice of walking away from a mortgage commitment because it makes no economic sense.

This will also take a jackhammer to the cement that locks families in place when they’d readily move to where the next jobs and opportunities are.  Debt forgiveness fuels a virtuous cycle that drives spending and the creation of more jobs.

Crazy?  Not hardly.  Through the International Monetary Fund and World Bank, we’ve restructured debt in what now are some of the most robust developing countries (Brazil 1983, Viet Nam 1985, Russia 1988) on earth.  We may not like the image or precedent of restructuring but get over it.  We need action that hits immediately.

Is it costly?  Yes and no.  The banks would be hit but they also sponsored some of the foolish lending that led to this.  To ease the pain, let’s have them get a chunk of any appreciation going forward.  While taking writedowns would add to their already shaky under capitalization, we could use a combination of tax credits and deferral to spread the write downs over several years.

Are we giving some consumers a break and not others?  Yes but just like the Wall Street and GM bailouts, it’s a move that creates demand for all businesses.

No one is talking about a V shaped recessionary bounce anymore.  The choices are muddling through with slow growth or a double dip.

Until the middle class is out of the debt pool, we’re at the very best going to continue to tread water.

Next post: Can Google & Motorola Make this Marriage Work?