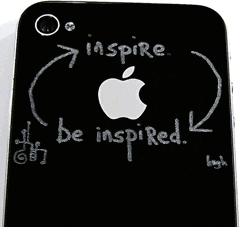 Apple rocked the world with the iPhone introduction in January, 2007.  At the time, smartphone leaders Nokia, Blackberry and Palm were squeezing email and PC content on to tiny screens. Apple expanded the screen, added navigation gestures followed by thousands of apps that transformed the small device into an expansive experience.

If there’s any company that knows success invites imitation, it’s Apple.  Windows mimicked the Mac interface and now Google, Microsoft and Blackberry have responded with “me-too” iPhone’s.  One can argue they’re not as good but the fact is the gap is shrinking, and in some features they surpass Apple.

As described in an earlier piece defining the Attractive Platform Strategy of Apple, sustaining platform leadership has four requirements:

2. Keep end user purpose and experience at the forefront

App developers are currently the most important platform contributor followed by carriers.  First and foremost, app developers want people to buy and use their apps.  Therefore when the market share of platform rises, it attracts more interest.  From 2007 to 2009, the iPhone was by far the most attractive platform.   Recently Google’s Android market share has grown plus Microsoft’s introduction of Windows Phone 7 was received better than many expected.  Bottomline: the market share gap is smaller

Second, as market share fragments between competitors, app developers need to get their apps on as many devices as they can with the minimal effort.  Early on, Apple inserted terms in their development agreement that made it difficult for app developers to leverage efforts to other operating systems such as Android.  As noted in our piece Apple’s New Platform Citizenship, Apple later withdrew some of the most onerous terms.  That said, Apple believes that without high control, it’s very difficult to deliver a superior user experience.

Third, apps developers want to turn out products quickly.  During Apple’s earnings call, Steve Jobs argued Android developers at TweetDeck had to test 244 different handsets and over 100 versions of Android versus only two versions of Apple’s IOS and handsets. He contends that by controlling the hardware and software combined with a single sales site (the app store in iTunes), Apple provides a better development and distribution experience.  Taking its cue from Allstate Insurance, it’s an argument to put oneself in Apple’s good hands.

Developers, and now advertisers, know that Apple controls how these hands move and change.  Apple’s penchant for high control makes many nervous.  With nearly half their revenue now coming from the iPhone, it’s not an unreasonable fear.  Apple’s margins were down this quarter.  If the competitive pressures increase and margin erosion becomes a trend, they will take actions to preserve their own interests.  Based on their history as a company that’s iconoclastic, highly end user focused and rich ($51B in the bank), they could take actions that change the developers’ playing field.

Keep end user purpose and experience at the forefront

The gap between Apple’s user experience and competitors is shrinking

Apple is peerless when it comes to creating elegant, easy-to-use computing.  The problem is that most of their innovations such as icons, screen clarity and gesture-based navigation are easily copied.

Google, Microsoft and Blackberry phones now have some or all of these features.  Users are responding positively to more choices.  Nielsen U.S. market share statistics for 2010 show that among new purchasers, Android has grown from 14% to 32% while Apple has shrunk from 32% to 25%.

As good as Apple is, total customer experience on data hungry smartphones is dependent on the cellular carrier’s speed and call clarity.  In contrast to Android which has phones on every U.S. carrier, Apple only has AT&T whose reputation is less than stellar.  Rumors are Verizon will carry the iPhone starting in 2011.  These are supported by an announcement agreement for Verizon to carry the iPad so it’s hard to imagine doing one without the other.

That said, I’d argue that to grow market share, Apple needs access to Verizon’s subscriber base more than Verizon needs Apple.  Additionally, Apple’s voice quality and connection technology has lagged relative to other handset manufacturers.  They may learn how to improve this faster on Verizon’s where network reliability is not the issue.  Undoubtedly, some dissatisfied customers will defect from AT&T but the only accretive market share will come from pent up demand within Verizon’s customer base.  After that initial pulse, the competitive battle will resume.

As good as the iPhone is, it doesn’t appeal to everyone.  Carrier promotions and pricing arrangements with other handset manufacturers can be close enough to compete.  Apple mimics BMW in that they offer “the ultimate driving machine” but with similar premium pricing AND limited models.  Just as some people chose utility or softer ride over handling, an Android buyer can select from multiple manufacturers, carriers and form factors.  When you put yourself into Apple’s good hands you have to remember they only have two of them.

A platform leader has to incorporate the interests of all stakeholders to foster platform growth while reaping sufficient benefit to justify assuming the leadership role.

Apple’s Macintosh and music history is that they are better at getting their share of the pie than growing it.  The iPod/iTunes combo may have saved the music industry but it destroyed the record labels’ business model.  While the iPhone attracted subscribers to AT&T, Apple retained control of the handset and initially, took a cut of users’ monthly bills.

Apple believes that controlling hardware and software is essential to creating a superior user experience.  As noted, Jobs believes this is also better for developers.  Even so, success depends on Apple continuing to have superior taste.  Jobs would argue the numbers prove it.  Looking backward, I’d agree.  But if I look forward, I’m less convinced.

Apple continually beats Google and Microsoft on taste.  The engineers at both competitors are brilliant but lousy at the intangibles that differentiate Apple products and marketing.  But Google and Microsoft are relentless, high tech product life cycles are short and while not as innovative, Windows 7 and now Android are credible competitors.

Now let’s add in shifting global markets.  Apple’s genius is deeply embedded in the U.S. culture and as lesser developed economies exert more influence, will it exert the same pull?  Can the premium price points gain sufficient share in these new economies.  There’s no question they can continue be BMW-like in these markets but will that translate into significant global market share?  Can they attract the best non-U.S. developers if other handset/carrier combinations have significantly greater share?

There is also the question of Apple’s carrier relationships.  Each has more competent handset options and none want to be a “dumb data pipe” that just passes service revenues through to others.  Android enables carriers to customize their phones.  In their mind, this provides differentiation while Jobs argues it diminishes the user experience.  Even if Jobs were right and there is a single best user experience, will carriers throw their promotion effort behind alternatives?

Apple history with the Mac and iPod suggest that following initial introduction, most innovation is evolutionary.  For example, the new iPhone OS adds multi-tasking which some already had.  Apple has extended the iPhone platform onto the iPad helps expand their presence on devices.  It remains to be seen how effectively tablets based on Android or Microsoft operating systems will be.

Apple updates the operating system through iTunes which effectively limits the number of versions in use to the latest and prior version.  In contrast, Android, has at least 4 versions in use plus there are modifications added by carriers.  This creates fragmentation that requires multiple development and test cycles.  On the other hand, it gets new features out quickly.

All players have to be looking forward and figure out what to do when mobile speeds and coverage increase such that mobile cloud computing becomes practical.  Developers could have their apps in the cloud and need only a snippet of operating system specific code on the phone to point to them.  This would cripple the app-based primacy of the today’s phones.

A more daring play would be if the carriers changed their model from subsidizing handset sales to including them as part of a subscription model.  For example, a platinum customer could choose from a set of high end phones with the right to switch every 90 days.  A gold customer could choose from the next class of phones, with switching rights twice a year.  The point is less the validity of this particular model than using it as an illustration of how relationships within the ecosystem could dramatically change the power structure within the platform community.

Finally, we have yet to see how emerging uses for the phone will change the landscape.  In less developed countries, phones are becoming central to local finance and commerce.  Location-based services that go beyond knowing where your friends are at the moment are coming fast.  Health care is looking at phones as a critical bridge for patient records.  Could it be that just as GPS is now added to all phones, phone technology could be omnipresent on some yet to be discovered device?

In a nutshell, the first act is over.  It’s time to see how Apple leads and competes on a more complex field and against more competent players.  Critical to their success will be how they evolve their platform leadership.